A word with… razz mattreezy

Q1. Who is razz mattreezy?

My name is Matt, I am a 22 year old masters student from Aberdeen who is now living in Glasgow. razz mattreezy is the culmination of my romantic relationships and my experiences growing up over the last 5 years.

Q2. What’s the project about, and where do you see it going?

Following an exciting introduction to live music and experience of being a recording artist with The 101, I was left wondering: what next? razz mattreezy was my answer to that question, and I felt my tempestuous relationship history and growth as an individual over my time at uni, deserved some attention in the form of music – plus it’s easy to write about.

With live music starting to make a resurgence, I wanna turn the focus to making fun, interesting and memorable live performances and keep the recording on the back burner for just a little while. My plan was to have 4/5 songs recorded and released and I have accomplished that, which I am incredibly proud of. But in terms of where do I see it going with recording, I think an EP is definitely next for me, so watch out for that one.

Q3. Where did you find/take inspiration from when writing/recording in lockdown?

A lot of the artists I listen to, have at one stage, or still are, artists which record and produce their own music from home. So I thought: “if they can do it, why can’t I?”. Obviously this is easier said than done, since home recording and producing comes with a big learning curve. I have played in various ensembles over the years, which still inspire me in my writing nowadays. This helps a lot with arranging different parts for each song and also helps me envision the songs in the context of a live performance.

During the second lockdown is when I wrote the bulk of my songs so far. This happened to coincide with the writing of my dissertation for my final year of uni, as well, as revising for my final exams. A big part of keeping me focussed and relaxed during my studies was listening to the lo-fi beats to study and relax to playlist on Spotify. I have always really enjoyed sampled, lo-fi music and there are parts of it which I try to incorporate into my songs. Whether that be a simple drum beat, a repeating motif or even a lo-fi rain sample like you hear in my song “Rain”, there are lots of little details that I try to work into my songs.

I’ve also got a real guilty pleasure for 90s hip hop and R&B music. A lot of the lyrical work on tunes by The Pharcyde and A Tribe Called Quest have my jaw on the floor and even laughing at some of the things they came out with back then. With razz mattreezy I’ve been able to go down the route of the spoken word stuff which has been met with good reception, which I am very happy about. I like trying to be clever and funny with my lyrics which is really inspired by the 90s hip hop era, and also artists like MF DOOM.

The artists who really stand out to me as inspirations are Rex Orange County, Tom Misch and Still Woozy. These guys are all so incredible and have that element of jazz and a bit of hip hop which I really love and definitely strive to produce my own spin on that through my music. These artists are also amazing at storytelling and conveying different emotions and experiences through their music, which again really stands out to me and inspires me. Additionally, they are all in their twenties which definitely intimidates me and makes me feel a bit inferior, but I’m doing my best and will continue to.

Q4. What is your song writing process?

Annoyingly, a lot of my songwriting inspiration comes to me when I’m out and about. This has led to me keeping a notes file on my phone, which is now filled with quotes and lyric ideas that I think of or read somewhere. I’ve found this really works for me and once I’ve found something I’m happy with, I’ll try to match it to a chord progression. Getting to the chorus/hook quickly is important to me and I feel that makes the song feel really exciting and to the point. There’s not much more to it than that!

Q5. Where did you write/record nervous?

I wrote Nervous initially to come after Rain. However, after recording it and playing around with it, I quickly grew to dislike it as I felt it wasn’t really what I was wanting to make. One night I was sitting with my girlfriend, and I showed her the demo that I had made months earlier. To my surprise she actually really liked it which inspired me to go back and rethink the song. I ended up only keeping the chorus lyrics and melody, the rest of the song I did from scratch which worked out really nicely as it let me show my progression as an artist which I personally really picked up on. It was all recorded in my dad’s office at home in Aberdeen, on his computer. He has always been so supportive with my music and is a great help and critic. Nervous came out on 21/07/21, so if you haven’t heard it, check it out.

Q6. Did you find yourself developing any weird/strange habits when recording in lockdown?

I have had to stop myself so many times from overproducing my songs. I’ll always be so quick to add in string parts of brass parts just because I can, and it can really dilute the sound and make things messy. Luckily, I had my dad to keep me right and make me aware of when I was being stupid. I still really want to play around with some proper strings or brass some day, maybe listen out for that on the EP. 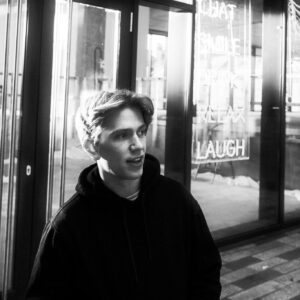 Q7. How did you find your mental health during lockdown? Did it have any impact on your songwriting?

My mental health during lockdown, for the most part, was okay actually. It was definitely better during the second lockdown though, I think. Because I was able to spend so much of my time on music, I definitely became more critical. At this point, songwriting was still a very new thing to me, in other words, I wasn’t writing my bohemian rhapsody just yet. This made it easy to be disheartened when things didn’t go how I wanted them to. I actually ended up writing a song called “just wanna quit sometimes” which really captures the feelings I had during that time.

Q8. Overall, do you think lockdown had a positive or negative impact on your music?

Positive. Definitely positive. I’m not sure there would be a razz mattreezy without the lockdown. The free time gave me a lot of opportunity to figure out song writing for myself and develop my own ways of approaching each song, as well as giving me the time to improve my musical skills and learn the production side of it all.

The only negative side was that I would always over-produce everything I wrote, which my dad was always aware of, and would tell me off for.

Q9. What do you have planned for the future?

I’m very excited to be able to announce that I will be playing my debut gig in Aberdeen next month as part of the True North Festival. This is very special to me for two reasons; the first is that it’s a hometown show – which is cool, and secondly, it’s the festival that the first 101 gig was at, so cool to see some parallels there too. Release wise, I wanna do an EP in the near future, however for the meantime I really want to refine the live sound and figure out how to make some exciting shows for people to enjoy.

I really like the show on Netflix called Bojack Horseman. I think I maybe watched it two or three times through over lockdown. I wrote a song called “rose coloured glasses” after hearing a line in the show mentioning exactly that. I am actually really proud of it and hope to release it one day. I even wrote a big outro for it with a string section – I’d love to record that live at some point.

I am a 100% salted caramel guy. Put that on anything and I will eat it. Cadburys ftw, always.

Fine rain can be nice when you are out walking somewhere, however I would definitely say heavy rain. Being inside and hearing/watching a rainstorm feels so peaceful and I personally find it relaxing. Lots of both in Scotland.

Q13. Any guilty pleasures when writing/recording in lockdown?

Retro telephone vocal effects. I would have every vocal sounding like that if I could get away with it. It’s so lo-fi and cool sounding. There’s 100% a time and place for that though.

To listen to razz mattreezy or find out more here’s some links: